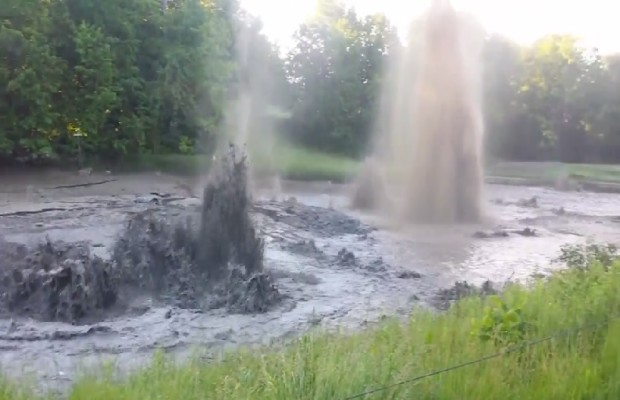 A naturally occurring leak of methane gas made for quite the spectacle at Lambton Shores Wednesday.

Fire and police responded to Lakeshore Rd., just east of Indian Hills Trail West after being notified of a gaseous odour around 7:50am.

Video posted to YouTube shows a churning pond at Indian Hills Golf Course with geysers of gas and water shooting high into the air.

Union Gas spokesperson Andrea Stass says the utility doesn’t have any pipelines in the area and the leak is naturally occurring from a methane gas pocket.

Stass says they were assisting with gas readings and sampling for analysis.

The Ministry of Natural Resources dispatched a Spills Action Centre Team to the area.

Lambton OPP Constable Travis Parsons says local traffic only was being allowed on Indian Hills Trail West as a precaution.

The declaration enables the municipality to engage provincial resources to help in determining the extent of the emergency.

Deputy Mayor Doug Cook says it’s an extraordinary event with naturally occurring gases being released from the ground in a localized area of the golf course.

Air quality is being monitored and no off site impacts had been detected.

The municipality is working with the Kettle and Stony Point First Nation, owners of the golf course.

Cook says the emergency declaration is precautionary and is expected to be very short-lived but will continue until the situation has returned to normal.

Residents are being asked to stay away from the immediate area until advised that the situation has been resolved.