We are keeping our fingers crossed 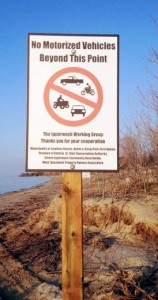 “We are keeping our fingers crossed,” said Centre Ipperwash Community Association president Eugen Dorey in response to the first long  weekend of the season at the beach that has been in the news since  December 2015. There will be no vehicle access on this stretch of  land this year.

Since the early 1970’s motorized vehicle use by the general public  has been limited on the section of Ipperwash Beach between Army  Camp Road and West Ipperwash Road.  This limitation was put in  place by the then Department of Lands and Forests with the agreement of Bosanquet Township, reportedly to deal with both  environmental and public safety concerns at the time.

“Short term progress has been slow but steady with adequate progress to meet the needs of this summer,” says Gerry Rupke, ward three councilor, “We are looking forward to similar success  in  the future discussions.”

Claiming the right to do so, in December 2014 the Kettle and Stony  Point First Nation removed barriers adjacent to the West Ipperwash,  Ipperwash, and Army Camp Road allowances.  Without the barriers in  place, vehicles were no longer physically prevented from accessing  the beach between the road allowances.

This action triggered concern from the municipality and the area  residents, and precipitated the immediate involvement of the Ontario Provincial Police, the Ontario Ministry of Natural  Resources and the Ontario Ministry of Aboriginal Affairs. Since that time the council, working with Kettle Point has been trying to  find a respectful and lawful solution to the disputed matter of  vehicle access to the Ipperwash beaches between West Ipperwash Road  andArmy Camp Road. As well, the mayor and CAO continue to press press for a meaningful and timely response from both the Provincial and  the Federal government as necessary, speaking to the claim of jurisdiction being made by Chief Tom Bressette.

Having said that, the municipality  asserts its own right and  obligation to regulate activities within its road allowance  including those affecting vehicle flow, and parking.

“That  notwithstanding the rights and obligations of affected property owners to represent their own concerns, the Municipality will reflect citizen feedback, specifically including  any concerns related to conflict of use that could affect public safety and negative environmental impact,” explains a report from CAO Kevin Williams to council.

The Provincial Government, through the Ministry of Aboriginal  Affairs, took a lead in drawing the affected stakeholders  together.  The “stakeholders” have become known as the “Ipperwash  Beach Management Group” and include: The Province (represented by  both the Ministry of Aboriginal Affairs and the Ministry of Natural  Resources and Forestry); The Chippewas of Kettle and Stony Point  First Nation; The Municipality of Lambton Shores; The Centre  Ipperwash Community Association; The West Ipperwash Property Owners  Association; and the St. Clair Region Conservation Authority.   Lambton Shores is represented by Mayor Weber, Councillor Rupke and  CAO Kevin Williams.

“Each of these parties has been encouraged to share any historic,  environmental, legislative or jurisdictional concerns related to  the beach area.  A large number of weekly/biweekly meetings through  the winter enabled an opportunity for the necessary communication  and shared understanding of issues between the parties.

In early April, and recognizing that longer term plans need to be  developed, these forums led to an interim agreement.  All parties  agreed to support a position of no unauthorized motorized vehicles  driving on the beach between West Ipperwash Road and Army Camp  Road.  The First Nation has also decided to implement this same  restriction on the beachfront of the former Ipperwash Park,” says Williams.

Outside of the working group, Chief Bressette and Mayor Weber have  both met with the OPP to advise of this decision.  Accordingly, the  OPP will be responding to policing needs on the beach in the same  manner as past years.

The working group has agreed upon a shared control sign to indicate  restricted motorized vehicle uses on Centre Ipperwash Beach.   Further, the group has agreed to the installation of a “bollard  style” fence to mark the edge of the road allowances and provide a  physical restriction to motorized vehicles.  The bollards will  remain open in between to encourage easy pedestrian access.  The steel guardrails that previously acted as a more formidable barrier  to access will not be installed.  A larger gap between posts has  been established to provide access for emergency vehicles.  The  intention is to close this gap with a draped rope for easy access  if needed.  None of these actions has an impact on the public’s use  of the Ipperwash or Army Camp Road allowances for waterfront access. It should be noted that after a reportedly successful 2014 season,  the beach management agreement between the First Nation and the  West Ipperwash Property Owners Association will be renewed for  2015.  The agreement permits controlled vehicle access to that  particular section of beach with a fee/permit structure in place.   This agreement also has no impact on the West Ipperwash municipal  road allowance which remains open for public access. In effect, all beach uses in  2015 will remain unchanged from 2014.

“The Ministry of Natural Resources has been instrumental in sharing  information with the working group.  They have advised that despite  the fact that both the province and the Centre Ipperwash property owners have deeds indicating ownership “to the water’s edge”, there  is a “Crown Reservation” across the beach portion of each  property.  The original Canada Company patent established this reservation to ensure beach access remained open to all members of the public.” Williams explains the Centre Ipperwash Community Association has for many years had a “Welcome, and rules”  sign at each road allowance inviting the public to use the beach  portion of their property, and advising of restrictions and use at an  individual’s own risk.  “These signs will be reinstalled to help  limit any liability of the property owners. The Working Group has not finished its business.  It is agreed that  a longer term plan for uses and management of the Ipperwash Beach,  and also the crown-owned properties along east and west Parkway  need to be addressed.  Again, all parties have agreed to a  framework for these continuing conversations.   The shared values  that will guide long-term planning for the beach include public safety, historical uses, risk liability matters, protection of natural heritage and the environment.

It is recommended that municipal representatives continue to participate as a member of the Ipperwash Beach Management Working  Group,” he said.

There is no direct financial impact with the recommendation.  The municipality will incur minor costs for the  maintenance and installation of signs and bollards along the West  Ipperwash, Ipperwash, and Army Camp road allowances.  It should be  noted that higher Lake Huron Water levels and heavy ice have lifted/ damaged a number of post and rail structures that previously  extended into the water and served to contain boat launching activities.  Wave and ice action has resulted in these structures impeding the access areas and causing underwater  hazards.  In the interest of risk management, staff have been  working to remove these damaged structures before boat launching  begins.

via the Lakeshore Advance | We are keeping our fingers crossed