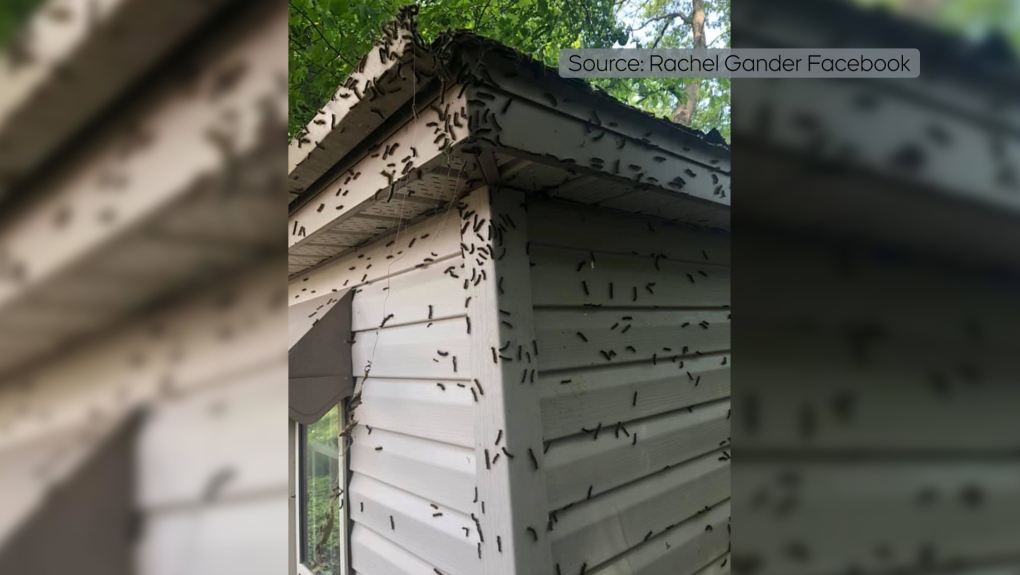 PORT FRANKS, ONT. — Rick Thomas hardly goes outside his Port Franks home anymore because of the abundance of gypsy moth caterpillars, and their droppings, which literally cover his deck.

“I could spend every day cleaning my deck, washing my roof, washing down the siding, but within a few hours, they’re already up on the wall again. It’s no fun,” he says.

Thomas is not alone.

Many Port Franks homeowners say they’re simply not going outside anymore because of this invasive species, the gypsy caterpillar, which is damaging trees, and in some cases, causing rashes on people that come into contact with them.

“They’re falling out (of) the trees on you. They crawl all over you. We can’t even let our kids outside right now,” says Port Franks resident Chris Pepper.

I have never seen so many people upset and so desperate for solutions. When you can’t enjoy your backyard, when you can’t open your pool, when you can’t let your kids outside – that’s not why any of us moved here,” says Romayne Smith Fullerton, a Port Franks resident.

While the problem is bad in Port Franks, the gypsy caterpillars are causing issues in nearby Grand Bend, Kilworth, Komoka, even the London neighbourhoods of Byron and Hyde Park.

It’s too late this year, but Port Franks residents are calling for aerial spraying to kill the caterpillars next spring. So far, the municipality isn’t interested in footing the bill for spraying trees on private property.

“This started last year, and it’s a hundred times worse this year,” says Vickie Guerette, who has cancelled most of her Port Franks cottage rentals due to the caterpillar outbreak.

Lambton Shores Mayor Bill Weber says he sympathizes with residents, but there are no plans to spray away the problem anytime soon.

“Municipal property is what the municipality has always looked after. Private property has always been looked after by private citizens. There would have to be a lot of consideration before we would make any change to that,” he says.

In the meantime, residents fear the invasive species will become more than a Port Franks problem soon enough.

“People coming to the Pinery Provincial Park, tourists coming to these areas. They’re going to get these caterpillars in their cars, wheel wells, and they will be transmitted to other parts of the province,” Pepper says.

The Lambton Shores area is home to 50 percent of the world’s Oak Savannah habitat and residents fear an invasive species put that ecosystem at risk.