admin Posted on May 25, 2015 Posted in In the News, Vehicle Barriers 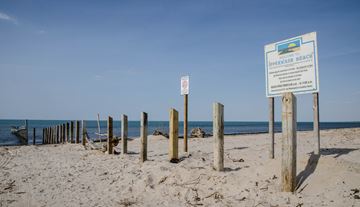 Ipperwash Beach has seen more than its share of conflict. Now, will a line in the sand marked by a row of wooden posts be enough to keep the peace in Lambton Shores this summer?

If history is any indication, it’s doubtful.

Tensions in the Ipperwash area have ridden a rollercoaster of ups and downs over the past decades; the most heated and tragic point being the shooting death of unarmed First Nations protestor Dudley George by police in 1995, during a dispute on the site of the former Ipperwash Provincial Park.

Many tensions still exist, though residents and neighbours on both sides are now more likely to talk things out than act on anger. Still . . .

While some cottagers cleaned driftwood blown ashore over the winter or swept sand from decks in anticipation of the Victoria Day long weekend, a row of 26 freshly installed posts marked the demarcation line of the latest skirmish involving land rights between the cottagers and the Kettle and Stony Point First Nation.

In April, a barrier blocking vehicles from driving along Centre Ipperwash went back up after a consensus was reached by the Ipperwash Beach Management Working Group (IBMWG), whose makeup includes municipal and provincial representatives as well as members of both the Kettle and Stony Point First Nation, and Centre Ipperwash Community Association.

“We’re all past that now,” said Lambton Shores Mayor Bill Weber referring to an incident in December that saw the removal of barriers blocking vehicles from the beach. “We are moving on forward to putting up control measures and signage restricting vehicles for the summer,” said the mayor who’s no stranger to the happenings along the beach having served on council since 2000.

For years, cars have been able to access the western portion of Ipperwash Beach that falls along the shoreline of Kettle and Stony Point First Nation. The stretch between West Ipperwash and Army Camp roads, however, has been off limits to drivers since barriers erected by the municipality in 1973 curbed the practice.

That section of waterfront, though, is sandwiched between land encompassing the band’s main reserve and the former Ipperwash Provincial Park, the same place where George was killed.

Long regarded by Kettle and Stony Point First Nation as a traditional right of way between the two sites, the band unilaterally removed those barriers in December.

In a statement issued at the time they came down, Kettle and Stony Point First Nation Chief Tom Bressette stated the band had opted to assert its jurisdiction over what it referred to as historic trails.

Repeated calls to Bressette for comment were not returned.

Removing the barriers angered local residents and environmentalists, putting forward a combination of concerns from safety to protecting the area’s ecosystem.

Cottage owners along that stretch claim deeds state their properties extend to the water’s edge. They contend that cars will be a detriment to both property values and the safe use of the beach, especially by children. They also cite potential liability issues if someone were to get hurt.

Weber conceded the current issue is far from resolved. He said the recent measures taken are intended primarily for this summer but echoed the IBMWG stance that they’re just part of ongoing discussions around developing a long-term development strategy for the area.

“We’re looking for solutions that are in the best interests of our two communities — First Nations and Lambton Shores,” said Weber. “It’s like neighbours, you want to get along and we want what’s best for our generation and the generations to come.”