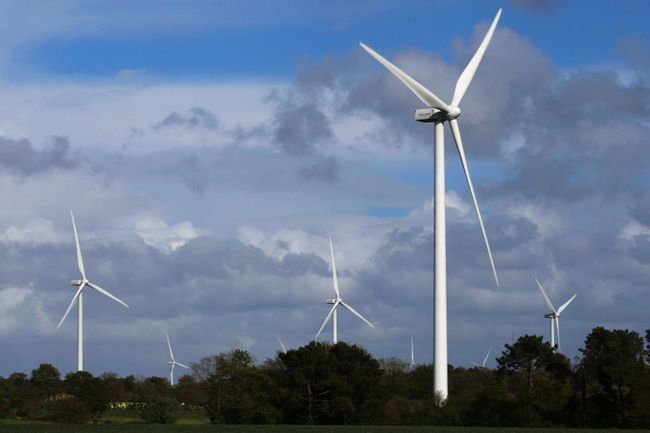 Most of Suncor and NextEra’s Cedar Point wind project turbines are now standing in farm fields across a section of Lambton County.

Suncor spokesperson Jason Vaillant said all of the components for the turbines have been delivered to the project sites in Plympton-Wyoming, Lambton Shores and Warwick Township.

“The construction work is proceeding on schedule, which is important for us.”

Following years of protests, lawsuits, appeals and court challenges that continue, the Cedar Point wind project has reached the point where it is expected to begin operating soon.

Construction began in March, and Vaillant said work has already started on the reclamation of some turbine construction sites.

“We’ve also energized the substation for the project, and we’ve actually started to commission some of the turbines that are already up,” he said.

“We hope to be in a position to be producing power at all of the turbines, in the coming weeks.”

Most of the turbines are stretched across Plympton-Wyoming, starting just east of Camlachie, and on across part of Lambton Shores to Army Camp Road.

The wind project wasn’t welcomed by many, including the municipal council in Plympton-Wyoming, and it has been actively opposed by a group of residents called We’re Against Industrial Turbines, Plympton-Wyoming (WAIT-PW).

The municipality even found itself in court when Suncor challenged bylaws aimed at wind turbine developers.

“It’s certainly not heart-warming to me,” Plympton-Wyoming Mayor Lonny Napper said about the turbines going up in the municipality that declared itself an unwilling host for wind projects.

“But, they’re here, and I guess we’ve got to deal with what we’ve got.”

Napper said he isn’t hearing as much from residents about the wind project as he did a year ago.

But, he added, he has been hearing from some of those who signed leases with the wind companies, allowing turbines to be built on their land, “who say, ‘I wish I’d never got involved with them.”

An Aberarder family that appealed the Cedar Point project’s environmental approval to a provincial tribunal, and lost, has gone on to appeal that decision to the Divisional Court of Ontario.

Asha James, a lawyer for the family, said the appeal is scheduled to be heard April 18 in London court.

Volunteers with WAIT-PW have also been delivering information packages to residents in the project area, including a diary to document impacts from turbines.

Conversations those volunteers had on doorsteps left them feeling the project has divided the community, he said.

“We do have situations of neighbours not getting along with neighbours, any more,” Giorno said.

Drivers heading east on Lakeshore Road can now see turbines on the horizon from as far away as Bright’s Grove.

But that hasn’t stopped the members of WAIT-PW from continuing their fight.

“We expected this to be an uphill battle,” Giorno said.

“You’re dealing with a provincial government, where its decision is almost cast in concrete. They don’t seem to listen to anybody.”

Not everyone in Plympton-Wyoming is unhappy the project went ahead.

Sandra de Jong said she can see seven turbines from the windows of her home in Sunset Acres, a subdivision along Lakeshore Road.

“They are the most powerful-looking, beautiful windmills that I have seen in this area,” she said.

“To me, they look majestic.”

Along with her husband Dean, de Jong voiced support for the Cedar Point project during the earlier Environmental Review Tribunal hearing.

“I am so pleased they are going up because they good for our health and our environment,” she said.