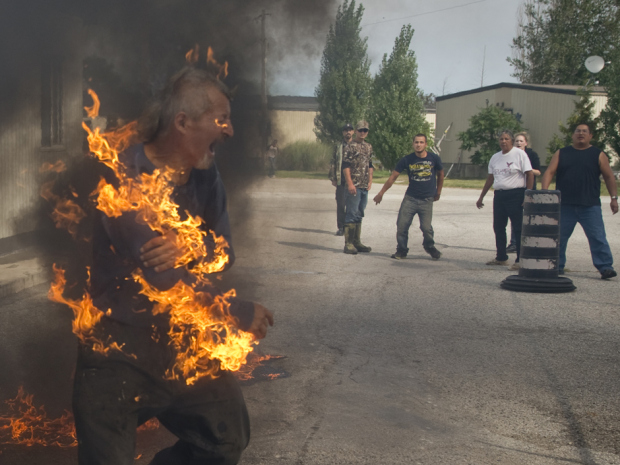 Pierre George is engulfed in flames during a dispute between members of the Kettle and Stony Point First Nations at the entrance to the former army camp being returned by the federal government in London, Ont. on Sunday September 20, 2015. Some residents of the camp set a small fire to stop others from entering at the end of a peaceful march to signify the return of the land. George's brother Dudley was shot and killed by an OPP sniper during an occupation at Camp Ipperwash in 1995. Craig Glover/The London Free Press/Postmedia Network

IPPERWASH, Ont. — What was supposed to be a day of celebration for members of the Kettle Point First Nation was marred by a scene of chaos, anger and pain as the brother of slain protester Dudley George was burned at the side of a gas-soaked protest fire.

Kettle Point members were holding a four-kilometre walk on Sunday from their land, near Sarnia, Ont., to the site of a former army camp that’s scheduled to be returned to the band. The walk was meant to celebrate the agreement with Ottawa for the land, which was meant to unite different factions within the band and give compensation to elders and their families who were moved to make way for the base during the Second World War.

Some descendants of the 16 families from the army camp lands, known as Stoney Point, set a protest fire in front of the camp gatehouse. Other band members tried to put out the fire with small water containers, and onlookers say Pierre George was trying to pour a portable gas can on the fire to re-ignite it when the can fell and flames rushed up his arms and across his chest.

Some said he caught fire when the can was kicked back at him. Quickly removing his shirt, George was walking and talking to supporters while an ambulance was called.

George was to be taken from a Sarnia hospital to a burn unit in London, Ont., with second-degree burns on his hands, ears, and neck, according to Jesse Oliver, a Stoney Pointer who helped him set the protest fire. The two set the fire to show not all band members support the agreement.