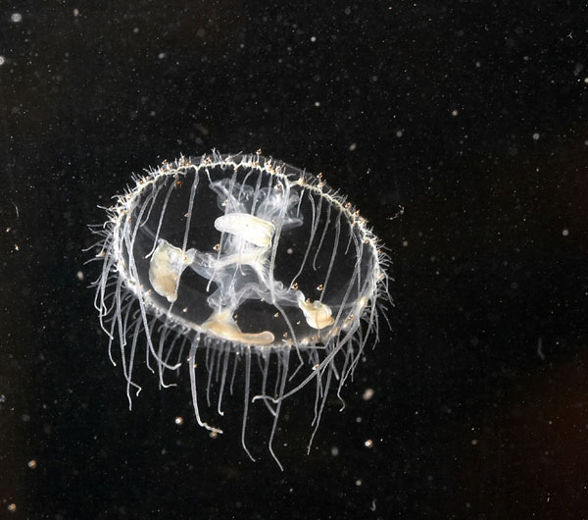 Step aside zebra mussels and phragmites, another foreign invader is lurking beneath the surface of Southwestern Ontario’s lakes and streams — a little umbrella-shaped creature that’s making people who see it do a double take.

They’re freshwater jellyfish, a non-native species that’s been spotted in Port Dover, Norfolk County, Welland, Fort Erie and in lakes and streams across central Ontario. Though the small and slimy translucent animals are a rare sight, one thing is clear: they’re here to stay.

“There’s no known way to remove freshwater jellyfish from a lake ecosystem once it is there,” said Jeff Brinsmead, senior invasive species biologist with the Ministry of Natural Resources and Forestry.

The ministry believes the jellyfish, whose proper name is Craspedacusta sowerbii, were stowaways on aquatic plants imported to Europe in the 1800s before they hitched a ride to Philadelphia in boat ballast water. Brinsmead said the jellyfish likely arrived in Ontario on a contaminated ship or plant. The invasive invertebrates, native to the Yangtze River in China, were first discovered in Georgian Bay in the 1950s and inland at Lake Muskoka in 2002.

“In both cases they were probably there for some time before they were reported,” Brinsmead said.

Though Muskoka is a hot spot for the 2.5-centimetre creatures, the ministry said freshwater jellyfish appear to have entered lakes Erie and St. Clair, they’re just not spotted often.

Darien Donnelly and Jeremy Stevenson didn’t know what to make of the translucent blob floating in the water near their fishing dock by Port Dover’s lift bridge July 8. They thought it was a piece of garbage, until it moved.

“It was just floating at our ladder then it started swimming. It was the only thing we caught that day,” Donnelly said.

The couple captured the jellyfish — first in a net, then on camera. The Facebook video of the unusual catch has been viewed more than a million times.

“We are very surprised,” she said.

“We just put it online only to show friends and family because we both grew up going out on the lake and had never heard of them.”

They’re not alone. Though the freshwater jellyfish have been floating around Ontario for decades, the tiny invaders have flown under the radar.

“They might not be seen every year. You’ve got to be in the right place in the lake at the right time to see them.”

The freshwater jellyfish are another unwelcome addition to a long list of invasive species in the Great Lakes region. Conservationists have been fending off zebra mussels in the Great Lakes since 1988 — tiny pests scientists say arrived on boats from European ports.

In Illinois, environmental agencies are desperately trying to prevent Asian carp from entering the lakes. The invasive fish were brought to North America in the 1960s and ’70s to control algae at fish farms, but floods helped them escape into the wild.

But unlike carp or clams, the freshwater jellyfish are unlikely to pose a threat to the ecosystem — or to humans — ministry officials said.

The jellyfish are eaten by native species such as turtles and crayfish and aren’t known to sting people.

Even so, the ministry is tracking the tiny pests and is urging the public to report sightings through its website or invasive species hotline.

“If possible, reporters should try to take a digital picture to assist in verifying the identity of the species they are reporting,” Brinsmead said.

A map of freshwater jellyfish encounters in Ontario can be found at www.eddmaps.org.