admin Posted on August 25, 2015 Posted in In the News Tagged with Phragmites 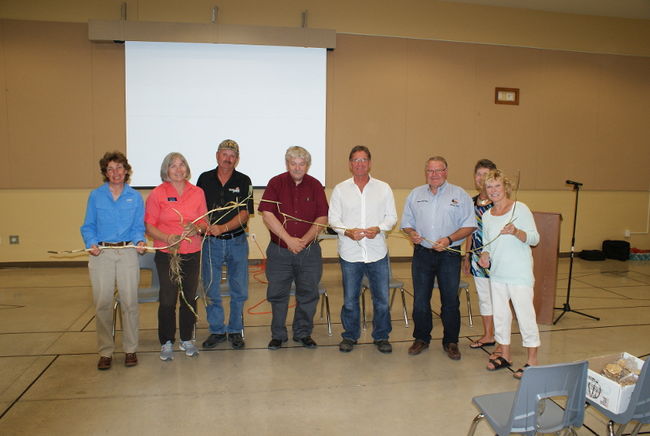 The Lambton Shores Phragmites Community Group (LSPCG) has spent the past several years controlling the invasive grass Phragmites australis in the coastal wetlands and is now taking the fight upstream from Port Franks and Grand Bend thanks to a grant from the Grand Bend Community Foundation.

Two information nights were held in early August in Grand Bend and Thedford to educate the rural residents about controlling Phragmites in agricultural areas, specifically municipal drains and roadside ditches.

Town of Kingsville drainage superintendent Ken Vegh shared the best practices used in the township on the shores of Lake Erie.

“Phragmites is like an out-of-control fire,” Vegh said. “You need all hands on deck to control it.”

Vegh got involved in the issue when the tall reed clogged municipal drains and roadside ditches, which interfered with farm drainage and crop production. Farmers were losing money because of flooded crops. The municipality used a comprehensive approach of controlling the Phragmites in the drains and roadside ditches. The approach is working, according to Vegh, and each year, they needed to do less spraying. Vegh encouraged other municipalities to be proactive.

Don McCabe, President of the Ontario Federation of Agriculture, pledged the support of Ontario’s largest farm organization to lobby the government on the policy front to get the right tools in place. McCabe said Agriculture and Agri-Food Canada identified Phragmites as Canada’s worst invasive plant in 2005.

Dr. Janice Gilbert works for Nature Conservancy of Canada (NCC) and has spent a good part of her career controlling Phragmites in the Lake Erie and Lake Huron coastal wetlands. Her presentation showed how the plant spreads quickly through seeds and rhizomes. There is no natural predator and no plants can complete with Phragmites. She stressed the importance of controlling Phragmites early before it takes over an area. In large stands, herbicide is the best control option, Gilbert said.

Al Williamson of Williamson Farms worked with the Municipality of Lambton Shores to control Phragmites in a ditch on his farm near Forest and said he will now be able to deal with any new shoots through his normal farm practices.

Lambton Shores Mayor Bill Weber said in 2010, he wasn’t aware of the significance of the large perennial grass but thanks to Nancy Vidler of Port Franks, he was made aware of the significance. Now the municipality is controlling Phragmites on its properties and spreading the word throughout Lambton County and has made a presentation to the province.

There is no herbicide approved in Canada for use over open water, even though it’s been approved in the United States. And that is frustrating the people trying to control the invasive.

“We’re fighting this with our hands tied behind our back,” Vidler told the audience. “If we had the tools, it would be gone.”

The Grand Bend Community Foundation grant also funded mapping of more than 100 sites in the watersheds draining into Port Franks and Grand Bend, mostly in roadside ditches. The sites range from less than 10 metres to over 400 metres. This information will help municipalities control Phragmites before it interferes with road and agricultural drainage. The LSPCG, NCC and Ausable Bayfield Conservation also wrote and distributed a fact sheet on controlling Phragmites in agricultural and rural areas with funding from the foundation.

via the Lakeshore Advance | Controlling Phragmites in drains and roadside ditches